taking a 16-year-old girl across state lines for sex

pedophile pastor Jack Schapp is seeking a compassionate release because of the COVID-19 pandemic and his record as a “model prisoner,” according to court records.

In the future, Pedophile Pastor Jack Schaap will be working with a nonprofit “to work to empower missionaries around the world, establish independent missionary schools to train young children and young people, and help to establish churches to meet the needs of people in foreign countries .”

Jack Schaap pedophile pastor  62, pleaded guilty to taking a 16-year-old girl he was counseling at First Baptist across state lines for sex, and in March 2013 he was sentenced to 12 years in federal prison. He is serving his sentence in Ashland, Kentucky.

In a recent court document, Pedophile Pastor Jack Schaap wrote he asked for a pre-indictment plea “to show (he) accepted full responsibility and to avoid a lengthy trial period which (he) felt would be detrimental” to the church “and to prevent any other staff personnel from being indicted.”

“Although there were extenuating circumstances and I did not know I was violating the law, the fact is I did violate the letter of the law and I did plead guilty. I realize the seriousness of the crime and accepted responsibility for it,” Schaap wrote.

He simulated a erect penis and masturbated 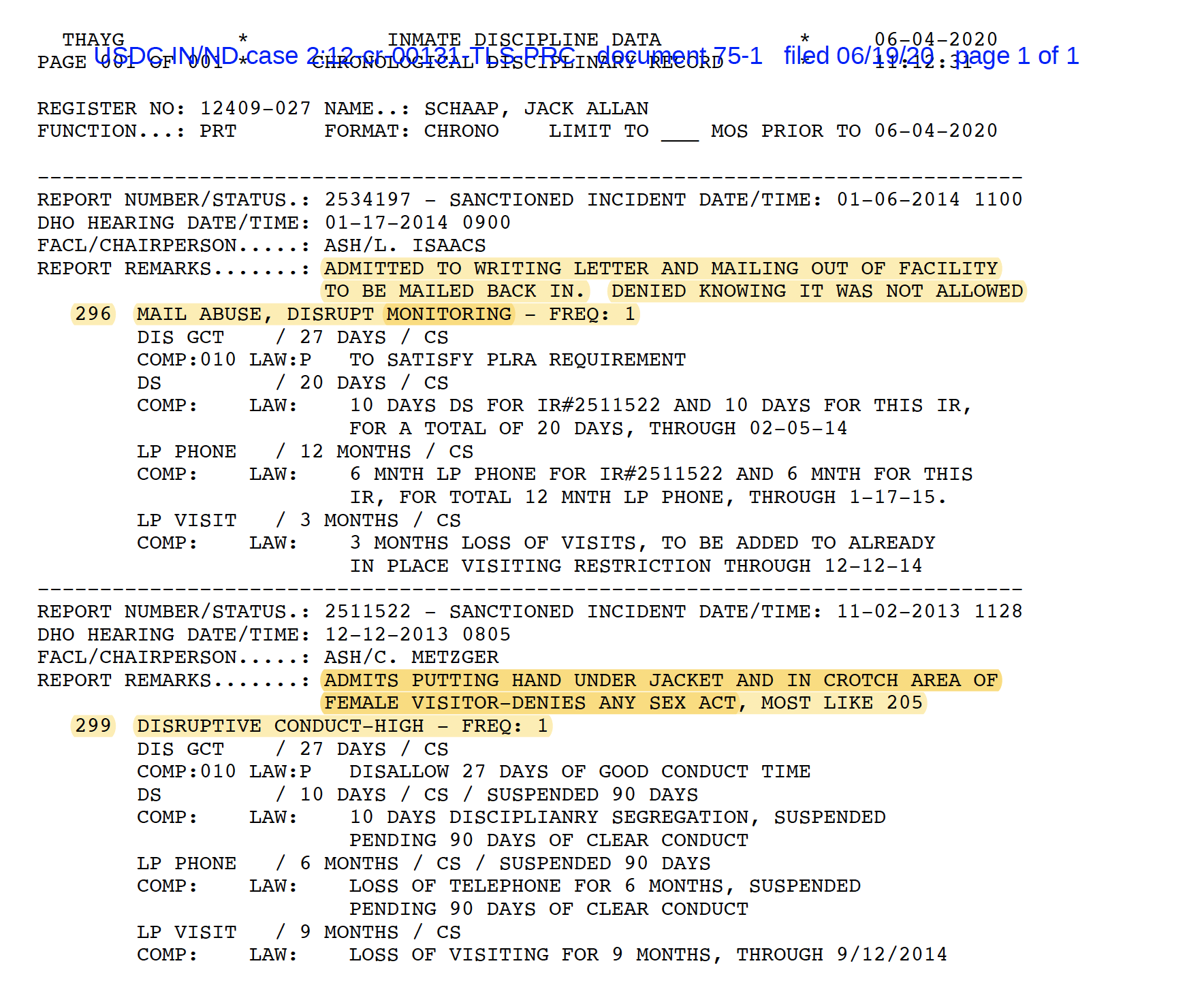 In 2013 – the year after he was sentenced by Judge Lozano – Defendant admitted putting his “hand under [the] jacket and in the crotch area of a female visitor,” for which he was disciplined. Id. And a year later, Defendant admitted “writing [a] letter and mailing [it] out of [the] facility [where he was housed] to be mailed back in.” Id. Interestingly, when confronted about this latter violation, Defendant “denied knowing it was not allowed” (id.) – much like he now claims that he “did not know [he] was violating the law” by arranging for someone else to transport a minor to Michigan and Illinois so he could have sex with her.

Various news articles, including Chicago Magazine and the Star-Telegram in Fort Worth, Texas, have documented the patterns of alleged sexual abuse and sexual assault – most cases involving teenage girls – by church leadership, including David Hyles, Jack Hyles’ son.

Most recently, Joy Ryder, of Highland, filed a lawsuit against the estate of Jack Hyles, his son David Hyles, Hyles-Anderson College and First Baptist alleging that David Hyles raped, sexually assaulted and sexually abused her and that church leadership covered it up in the late 1970s.

The biggest PPP loan to a religious organization went to First Baptist Church of Hammond, Indiana, which was able to retain 322 employees with a loan of between $350,000 and $1 million.

For many churches not meeting in person this April, May, and June (and not passing the offering plate), the PPP provided the monies necessary to pay staff and clergy, potentially heading off tens of thousands of people applying for unemployment benefits.

Yet there are some signs that churches and ministries’ initial financial concerns may have been overblown. A survey by the Evangelical Council for Financial Accountability found that by April, more than half of churches and Christian nonprofits reported that giving was back to pre-pandemic levels.

Christian camps and conferences as well as Christian schools remain most pessimistic about their financial future. Some Christian colleges have cited COVID-19 as a factor in recent faculty cuts.

Currently, Schaap’s release date is Feb. 2, 2023, after which he will serve time at a halfway house, according to court records.

Schaap filed for compassionate release April 23, but he was denied May 6, according to a letter from warden Allen Beard.

On June 1, he filed court records for a compassionate release because his parents are in poor health, which considers him amid the COVID-19 pandemic.

His parents both have health issues Schaap said in the filing.

Schaap has an older sister, but that “she is in very poor health herself,” he said.

“I fear greatly for their health, knowing that there is no one to care for them and knowing that they are both in need of help in their care,” Schaap wrote. “I am the only son and I know the responsibility for my parents’ care ultimately falls upon me. For their sake I am requesting compassionate release.”

Ryder, who started the non-profit organization Out of the Shadows to provide resources for victims of sexual abuse, expressed sympathy for Schaap’s parents, but “this is about him.”

“I’m sure the others in this story – his victims and church people – would love to be granted an early compassionate release from their pain and suffering because of his actions,” Ryder said. “His incarceration is a consequence of his actions and he should serve his full sentence.”

Schaap wrote that by September he will have served 67% of his sentence, and that he has been declared eligible for the First Step Act, signed by President Donald Trump in 2018 to “reduce the size of the federal prison population while also creating mechanisms to maintain public safety,” according to the Federal Bureau of Prisons.

Under the First Step Act, Schaap wrote, he has been categorized “minimum” for the likelihood of him committing another offense.

Schaap has worked toward being “a model prisoner,” with an “excellent work record with my prison bosses,” he wrote. Schaap also said he is in a vocational apprenticeship sponsored by the U.S. Department of Labor.

For several months last year, Schaap wrote he was able to serve as chaplain “preaching in chapel and conducting the communion service for the Protestant inmates” when the prison didn’t have a chaplain.

He also teaches a business plan workshop class and Bible classes in the chapel, Schaap wrote.

“Throughout my time here I have counseled men who had no place to go upon release and have helped get them connected to church-sponsored missions and other alternate care places throughout the country,” Schaap wrote.

Ryder said Schaap seems to be arguing “look at my good I’ve done while incarcerated for doing bad.”

“We’re just supposed to sweep away all of the bad just because you’ve been a good boy – or you think you have been – in prison,” Ryder said.

If released, pedophile pastor Jack Schaap said his main concern would be the well-being of his parents. “As time allows,” Schaap said he’d like to help his friends with a nonprofit they established to help people struggling with alcohol and drug recovery.

In the future, the nonprofit hopes “to work to empower missionaries around the world, establish independent missionary schools to train young children and young people, and help to establish churches to meet the needs of people in foreign countries .”

Ryder said she hopes the judge does not grant the pedophile pastor a compassionate release because the victims deserve justice.

“This is a way of showing them that you actually care about them and that their lives matter, is by having him serve his time,” Ryder said. “I hope the judge would see that through, for their sake.”

Hammond Baptist Church deacon was sentenced Thursday to 22 years in prison and ordered to pay more than $16.5 million in restitution after being convicted in federal court of defrauding hundreds of investors.

Despite his conviction and, in some cases, the loss of their money, a number of people wrote letters on Thomas L. Kimmel’s behalf in effort to have his sentence lowered.

Kimmel was convicted in June of mail fraud, money laundering and conspiracy.

“I still believe in Tom,” said Jean Smith, a St. John business owner when contacted Friday about the letter she wrote on Kimmel’s behalf.

Smith reaffirmed statements she made in her letter that stated that she believed “Tom made serious mistakes with his connection to Sure Line Corp. However, I do not believe he ever intentionally defrauded either me or any of the other investors.”

Smith had a $300,000 note with the Sure Line Acceptance Corp., the company that Kimmel was raising money for during various visits to churches throughout the country.

writing letters on Kimmel’s behalf were Toby Weaver, dean of students at West Coast Baptist College, who worked with Kimmel for more than 10 years at the First Baptist Church in Hammond and Thomas Vogel, Hammond Baptist Schools superintendent, who said Kimmel spoke to him about the investment several years ago.

Vogel wrote he rejected the investment as too risky, but said Kimmel was “forthright and honest about the fact that it was not a guaranteed return and there were no safeguards to keep me from losing all of my investment.”

According to a sentencing memorandum submitted by U.S. Attorney’s Thomas G. Walker office and signed by Assistant U.S. Attorney David A. Bragdon, however, Kimmel only cared about getting his 10 percent commission.

According to the government, the effect of the crime on about 326 victims “has been devastating.”

Prosecutors said Raymond and Val Jean Hucko intended to live off of the interest from their established retirement fund before trusting Kimmel to invest their entire 401(k) with the company. The once-retired couple is now trying to find work in Arizona, according to the government.

Prosecutors contended Kimmel saw the corporation “as a risky investment likely to fail, but he capitalized on the naivety of others.”

According to the government, between 2006 and 2011, the corporation raised more than $15 million from investors around the country. The corporation claimed it was the financing wing of a group of three used car dealerships in North Carolina.

According to the indictment, investors were promised their investment was backed by collateral – that for every dollar invested there was a dollar or more of collateral that existed to protect that investment.

“These promises were false,” according to the indictment. Instead, it contended the company used new money from investors primarily to repay past investors’ principal and interest and pay commission of the company’s three officers. In this respect, the indictment said the corporation was a Ponzi scheme where investors were paid their interest from new investor money and no business profits.

According to prosecutors, on Nov. 7, 2007, David Gibbs, the president of the Christian Law Association sent Kimmel a letter telling him and Jack Schaap, then-pastor of the First Baptist Church in Hammond, that “After careful review of the collateralized note program, I feel I must warn you of the possible liability to both First Baptist Church and to Mr. Kimmel himself for selling unlicensed securities.”

Schaap is serving 12 years in prison after pleading guilty in 2012 to having sexual relations with a teenage church member.

“After careful review of the collateralized note program, during phone conversations with both you and Dr. Schaap in November 2007, I clearly counseled you NOT to sell these unlicensed non-secure investments across state lines. I warned you of the possible liability that you could incur for selling unlicensed securities across state lines to non-sophisticated investors when you have no appropriate license to do so.

“In clear conscience, I cannot and will not recommend your high-risk, unsecured investments to a church or an individual. These are non-sophisticated investors who are trusting your representations that their investments are secure. That is simply not the case,” Gibbs wrote.

On June 24, 2008, Kimmel was told the corporation had lost money the entire first half of that year, but prosecutors said despite this information and Gibbs warnings Kimmel continued to sell investments to hundreds of people.

According to Bragdon, Kimmel sold investments in Sure Line Acceptance Corp. in churches across the country.

“A pastor would introduce him, and he would take the pulpit. He would then give what was supposed to be independent financial advice about honoring God with your money and getting out of debt,” prosecutors wrote. “In this position of authority and respect, Kimmel preached that according to the Bible, God wants people to invest.”